The 2019 Spring Chicken Disc Golf Tournament at Metchosin DGC was a massive success! SIDGS is proud to report it was our best tournament yet, with 78 entrants! It was also the largest turn out of an Island Series Tournament thus far. The day was incredible, with beautiful sunny conditions, the wind was breezy, but remained contestable for both rounds. The course was setup for high level action and it delivered. Not overly punitive, but just enough that poor throws were punished and great ones rewarded. Competition was tight in each division and many smiles were shared by all competitors. The Masters division was very tight this year but Hugues Lambert, the Uggg Monster himself, managed to take down 1st place with a 3 stroke lead over John Kiefer. The Novice division saw a massive turn out with Elvis O finishing in 1st place with a 3 stroke lead over Jeremy White. Intermediate had one of the most exciting finishes of the day, with a playoff between Will Henderson and Max Bazin. The playoff began on the nightmare peninsula hole, number 18, with both players managed to throw their drives in bounds and carded 3’s to push. On the next hole, course hole 1, Will managed to park his drive, flipping the pressure onto Max who had a 25 foot tester to push to another hole. His putt caught chains strong side, but was just a touch to wide to stick. The crowd let out a large AWE! and Will Henderson emerged victorious. The intermediate womans field had 2 entries this year, Rylee Harlos and Claire Chamernor. There was a grudge match on the course and although Claire managed to shave 10 strokes off her second round, it wasn’t enough to catch Rylee! The Advanced Field played like they had something prove, with the red hot Ben Corno winning another Island Series event. Kevin Gosselin finished 4 strokes back in 2nd, and Chris W another 4 strokes back in 3rd. After the first round the Open Field was tightly bunched, with the tournament still hanging in the balance and Geoff Maciver holding onto a 1 stroke lead over last years champ David Simmonds. In the second round David came out firing and shot a tournament best 6 under par round, leading him to a commanding 5 stroke victory over the field to become the repeat Spring Chicken Champion. Congrats to all the participants, thank-you so much for coming and making this tournament so successful. Thanks to all the tournaments sponsors, without your support this event would not be possible!! Thanks to:

Thanks again from SIDGS, we had a blast and can’t wait to do it again next year! 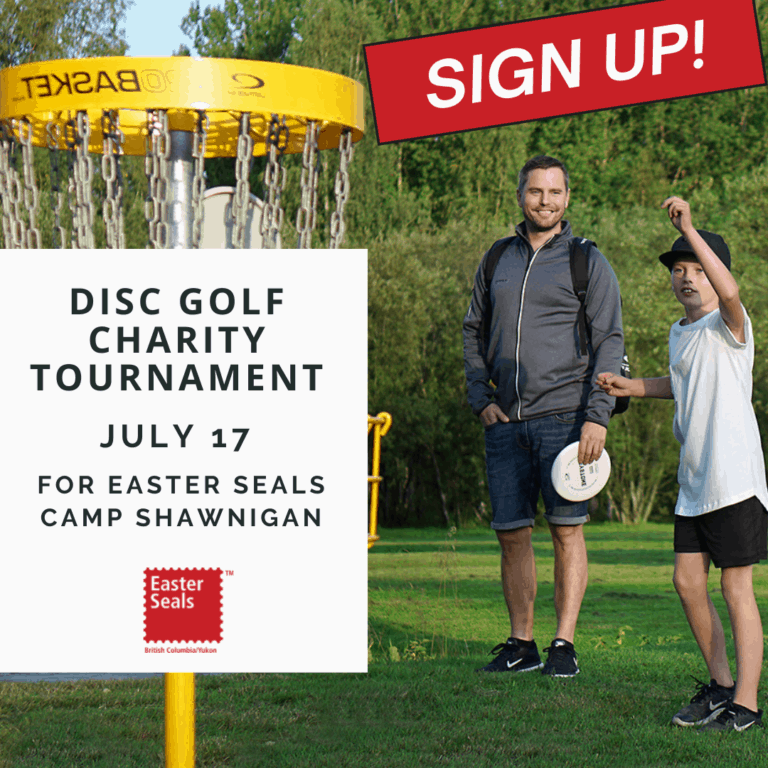 If you’re looking for an opportunity to support an amazing cause and to get out and play the amazing Mary’s Farm, then look no…

Big news from South Island Disc Golf Society for 2018: Membership has been reduced to $15 for adults and $10 for youths. Membership includes…

Hello Disc Golfers! This is it! the first ever disc golf tournament at the Cedar Hill Golf Course. The Cedar Hill Open! The C.H.O.!…

Thinking about becoming an SIDGS Member? Join now and reap the rewards of our Membership Benefits Program. Receive a 2021 Bag Tag to compete…

No products in the cart.